The Enigmatic Reality of Time 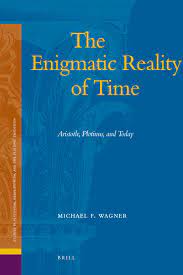 The nature and existence of time is a fascinating and puzzling feature of human life and awareness. This book integrates interdisciplinary work and approaches from such fields as physics, psychology, biology, phenomenology, and technology studies with philosophical analyses and considerations to explain a number of facets of the perennial question of time’s nature and existence, both in contemporary and in its initial classical Greek context; and it then explores and explains two of the most influential investigations of time in classical Western thought: Aristotle’s, as presented in his Physics, and the (neo)Platonist Plotinus’ in his treatise On Time and Eternity. Original interpretative perspectives are argued in both cases, and special attention is paid to Plotinus as partly responding to and critiquing Aristotle’s account.

Chapter One – Is Time Real?

Chapter Three – The Makings Of A Temporal Universe

Chapter Five – Cosmic Motion And The Speed Of Time

Chapter Six – Temporal Cognition And The Return Of The Now

Chapter Eleven – Indefinite Temporality And The Measure Of Motion