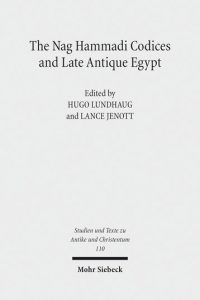 This volume showcases the new trend in scholarship to treat the Nag Hammadi Codices as sources for Christianity and monasticism in late antique Egypt rather than for Gnosticism. The essays situate the Nag Hammadi Codices and their texts in the context of late antique Egypt, treating such topics as Coptic readers and readings, the difficulty of dating early Greek and Coptic manuscripts, scribal practices, the importance of heavenly ascent, asceticism, and instruction in Egyptian monastic culture, the relationship of the texts to the Origenist controversy and Manichaeism, the continuity of mythical traditions in later Coptic literature, and issues relating to the codices’ production and burial. Most of the essays were originally presented at the conference “The Nag Hammadi Codices in the Context of Fourth- and Fifth-Century Christianity in Egypt,” organized by the ERC-financed project New Contexts for Old Texts: Unorthodox Texts and Monastic Manuscript Culture in Fourth- and Fifth-Century Egypt (NEWCONT), at the University of Oslo in December 2013.

Christian Bull – Hermes Between Pagans and Christians in Fourth Century Egypt: The Literary and Historical Contexts of the Nag Hammadi Hermetica

Julio Cesar Dias Chaves – From the Apocalypse of Paul (NH V, 2) to Coptic Epic Passions: Welcoming and Greeting Paul and the Martyrs in Heaven

Jon Dechow – The Nag Hammadi Milieu: An Assessment in the Light of the Origenist Controversies (with Appendix 2015)

René Falkenberg – What has Nag Hammadi to do with Medinet Madi? Literary connections between Eugnostos and Manichaeism

Lillian Larsen – Slippery Sources: The Sentences of Sextus as Sayings and Stories (and Schooltexts)

Louis Painchaud – The Production and Destination of the Nag Hammadi Codices

Philip Sellew – Reading Jesus in the Desert: The Gospel of Thomas Meets the Apophthegmata Patrum

Blossom Stefaniw – Hegemony and Homecoming in the Ascetic Imagination: Sextus, Silvanus, and Monastic Instruction in Egypt

Paula Tutty – Books of the Dead or Books with the Dead: Interpreting Book Depositions in Late Antique Egypt

Michael A. Williams and David Coblentz – A Reexamination of the Articulation Marks in Nag Hammadi Codices II and XIII