The Philosophy of Early Christianity 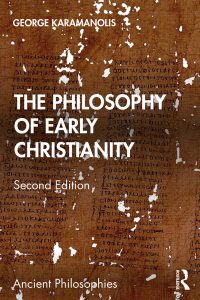 It examines the first attempts of Christian thinkers to engage with issues such as questions of cosmogony and first principles, freedom of choice, concept formation, and the body–soul relation, as well as later questions like the status of the divine persons of the Trinity. It also aims to show that the philosophy of early Christianity is part of ancient philosophy as a distinct school of thought, being in constant dialogue with the ancient philosophical schools, such as Platonism, Aristotelianism, Stoicism, and even Epicureanism and Scepticism. This book examines in detail the philosophical views of Christian thinkers such as Justin Martyr, Clement of Alexandria, Irenaeus, Tertullian, Origen, Basil, and Gregory of Nyssa, and sheds light in the distinct ways they conceptualized traditional philosophical issues and made some intriguing contributions. The book’s core chapters survey the central philosophical concerns of the early Christian thinkers and examines their contributions. These range across natural philosophy, metaphysics, logic and epistemology, psychology, and ethics, and include such questions as how the world came into being, how God relates to the world, the status of matter, how we can gain knowledge, in what sense humans have freedom of choice, what the nature of soul is and how it relates to the body, and how we can attain happiness and salvation. This revised edition takes into account the recent developments in the area of later ancient philosophy, especially in the philosophy of Early Christianity, and integrates them in the relevant chapters, some of which are now heavily expanded.

The Philosophy of Early Christianity remains a crucial introduction to the subject for undergraduate and postgraduate students of ancient philosophy and early Christianity, across the disciplines of classics, history, and theology.

Preface to the Second Edition

Preface to the First Edition

Chapter 1 The Christian Conception of Philosophy and Christian Philosophical Methodology

Chapter 2 Physics and Metaphysics: First Principles and The Question of Cosmogony

Chapter 4 Free Will and Divine Providence

Chapter 5 Psychology: The Soul and Its Relation to The Body