The Syntax of Time

The Phenomenology of Time in Greek Physics and Speculative

Logic from Iamblichus to Anaximander 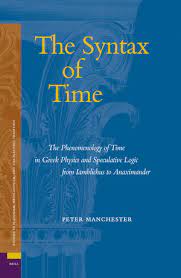 The fourth century Neoplatonist Iamblichus, interpreting Plotinus on the topic of time, incorporates a ‘diagram of time’ that bears comparison to the figure of double continuity drawn by Husserl in his studies of time. Using that comparison as a bridge, this book seeks a phenomenological recovery of Greek thought about time. It argues that the feature of motion that the word ‘time’ designates in Greek differs from what most modern scholarship has assumed, that the very phenomenon of time has been misidentified for centuries. This leads to corrective readings of Plotinus, Aristotle, Parmenides, and Heraclitus, all looking back to the final phrase of the fragment of Anaximander, from which this volume takes its title: « according to the syntax of time. »

Chapter One –Two-Dimensional Time in Husserl and Iamblichus

The Problem of the Flowing of Time

The Flux of Consciousness

The Transparency of the Flux

Time-Framing in Locke and Hume

The Dimensions of Transparency

The Figure of Double Continuity

The Double Intentionality of Disclosure Space

Time as the Sphere of the All

Chapter Two – Time and the Soul in Plotinus

The Schema of Participation

The Silence of Time in Plotinus

Soul and the Surface of Exoteric Time

The Spanning of Motion

The Scaling of Spans

The Unit of Disclosure Space

The Soul of Physical Time

Signpost 2: Whole; Signpost 4: The Coherent One

Signpost 3: Now is All at Once and Entirely Total

Chapter Five – Heraclitus and the Need for Time

Review: The Path to Heraclitus

From Husserl to Heraclitus via Iamblichus

Time in Heraclitus: The Circular Joining of ἀεὶ and αἰών

Heraclitus as a Gloss on Anaximander

Appendix 1 – Physical Lectures on Time by Aristotle: A MinimalTranslation

Appendix 2 – Fragment 8 of the Poem of Parmenides: Text and Translation