The Theory of Will in Classical Antiquity 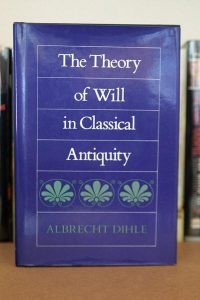 The concept of the will as a faculty of mind independent of the intellect or the emotions was never employed by ancient Greek thinkers. Professor Dihle investigates what the Greeks did think about voluntary activity, how they were able to work without the concept of the will, and the difficulties they encountered because of the lack of such a concept. His six chapters – Cosmological conceptions in the Second Century A. D., The Greek View of Human Action I, The Greek View of Human Action II, St. Paul and Philo, Philosophy and Religion in Late Antiquity and St. Augustine and His Concept of Will – take him virtually through the whole of Greek literature, from Homer through Plato and Aristotle and later philosophers, trough the early Christian writers, and finally into the Roman tradition. The study culminates with St. Augustine, who first used by modern thinkers, to point to the very essence of the moral self of man. Professor Dihle’s work combines immense intellect and learning with great clarity of exposition. His book will gain a wide readership among those interested in philosophy, religion, and classical studies.

Index of Greek and Latin Words