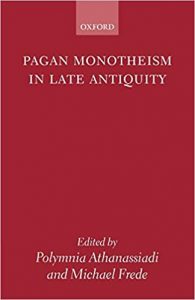 In this book distinguished experts from a range of disciplines (Orientalists, philologists, philosophers, theologians and historians) address a central problem which lies at the heart of the religious and philosophical debate of late antiquity. Paganism was not a unified tradition and consequently the papers cover a wide social and intellectual spectrum. Particular emphasis is given to several aspects of the topic: first, monotheistic belief in late antique philosophical ideals and its roots in classical antiquity and the Near East; second, monistic Gnosticism; third, the revelatory tradition as expressed in oracular literature; and finally, the monotheistic trend in popular religion.

Monotheism in the Gnostic Tradition

The Cult of Theos Hypsistos

The Speech of Praetextatus