The Enneads of Plotinus 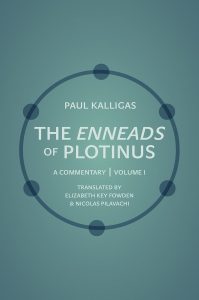 This is the first volume of a groundbreaking commentary on one of the most important works of ancient philosophy, the Enneads of Plotinus—a text that formed the basis of Neoplatonism and had a deep influence on early Christian thought and medieval and Renaissance philosophy. This volume covers the first three of the six Enneads, as well as Porphyry’s Life of Plotinus, a document in which Plotinus’s student—the collector and arranger of the Enneads—introduces the philosopher and his work. A landmark contribution to modern Plotinus scholarship, Paul Kalligas’s commentary is the most detailed and extensive ever written for the whole of the Enneads. For each of the treatises in the first three Enneads, Kalligas provides a brief introduction that presents the philosophical background against which Plotinus’s contribution can be assessed; a synopsis giving the main lines and the articulation of the argument; and a running commentary placing Plotinus’s thought in its intellectual context and making evident the systematic association of its various parts with each other.

Porphyry: On the Life of Plotinus and the Order of His Books

Key to the Chronological Order of Plotinus’ Treatises

Index of Passages Cited With Their Abbreviations and Modern Editors